It is a Saturday. We have no plans. Crappy Papa suggests we all go to the 2011 Car Show. The kids are excited!

We find out that kids get in free! Bonus. 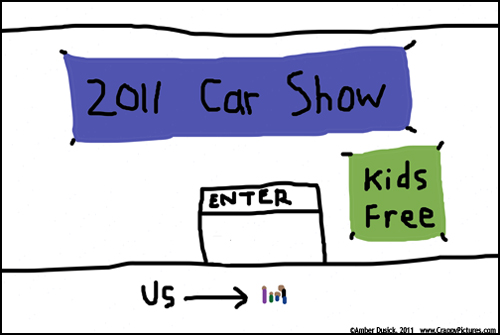 It is in a convention center that holds more people than the town I grew up in.

And all of those people are already inside. 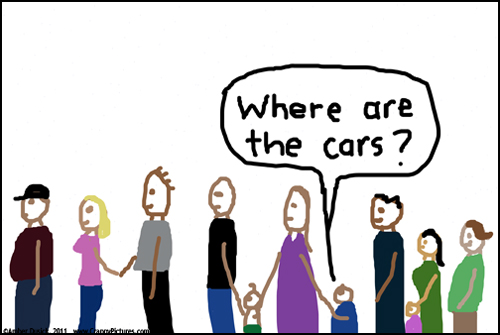 I do not like overly crowded places. I get this terrible urge to bulldoze everyone in front of me. I don't ever do it but someday I might snap.

After wading through seas of people we get to an actual car on display: 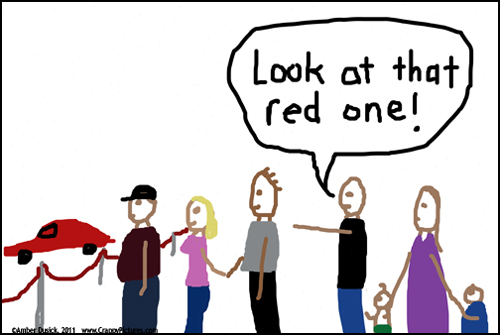 Crappy Papa is a dude so he automatically appreciates cars on a much higher level than I do. Even so, he isn't into cars. We are both doing this for the kids.

The kids who seem completely uninterested in this more-expensive-than-our-house" car in front of us.

So we move on to the weirder ones: 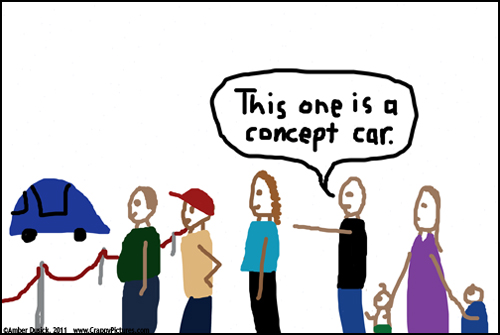 This one was slightly interesting even to me, because it looked like the car from Sleeper.

So we head to a sleek yellow one. They act like they can't even see it!

Because they can't see it.

This is what kids see: 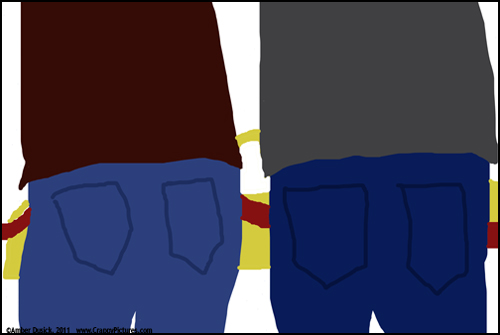 So we have to pick them up. Often. 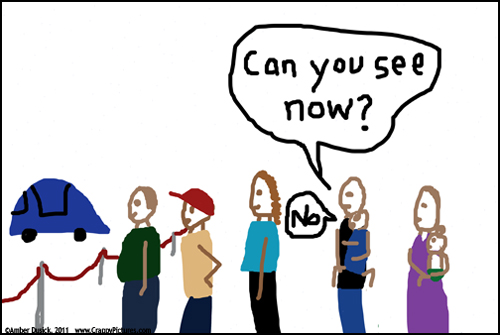 Even then the view is spotty.

I'm pretty sure they are actually as bored as I am. 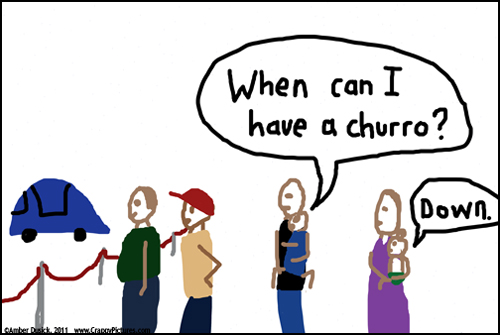 Because who doesn't like to solve boredom by eating?

We saw a churro stand on the way in and we said "maybe later" which is the best possible answer we could ever give our children during an outing.

The "can I have it now?" and "is it later yet?" requests every five minutes don't bother me.

Using "later" gives us leverage in case of emergencies. This is not an emergency so we continue with the "later" answer.

We know there is a whole wing of cheaper, ordinary cars that they can touch and sit in. They will love this!

So we make our way through the sea of people again.

Crappy Boy offers his review with a dissapointed tone. I feel bad.

Eventually, we arrive in the normal people car section and I have high hopes.

The first thing they spot is a newer version of our own car: 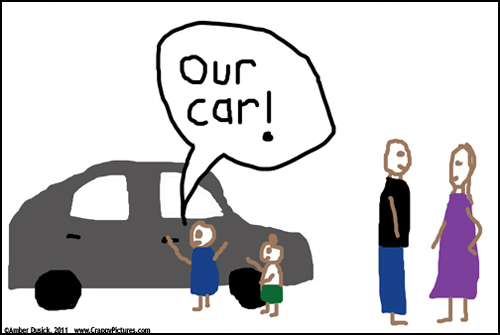 They are thrilled! Finally! They are happy!

They even get to go inside! Of our car. 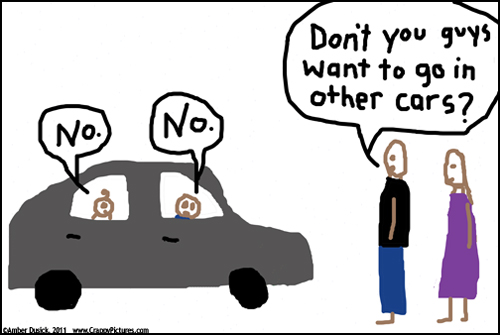 They had no interest in going in any of the other cars though.

Yes, we brought them to a car show so that they could sit in a shinier replica of the car they ride in everyday.

Kids are so weird.

But we have one more trick in the bank. And it isn't the churro. It is the kids' section.

We didn't mention the kid section because if they knew games and rides were lurking in the building they would have run amok trying to locate it. And nobody wants a killing spree.

So we head to the kids' section. 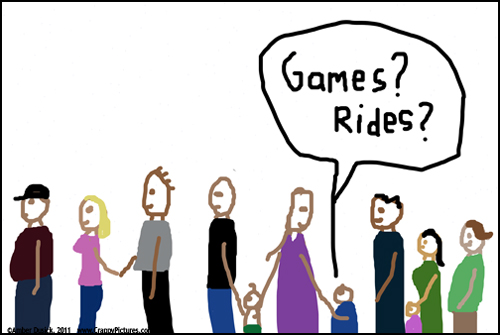 We have no idea what the kids' section has but it is probably awesome. There were signs for it everywhere.

It is a mostly empty room that is the size of an entire elementary school. In one corner is a bouncer. 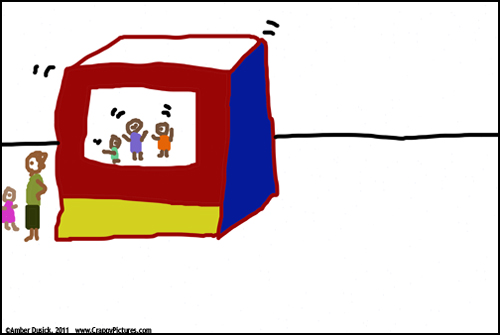 With a line. A very long line. 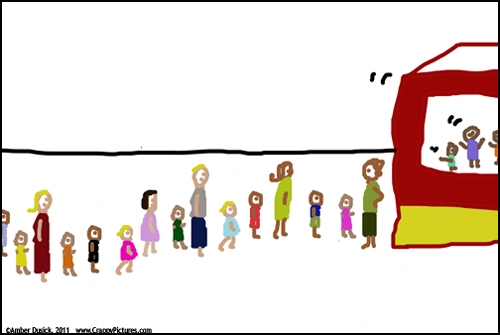 An entire elementary school worth of kids. In line.

I go to the start of the roped off line area and ask the woman who works there how long the wait is. 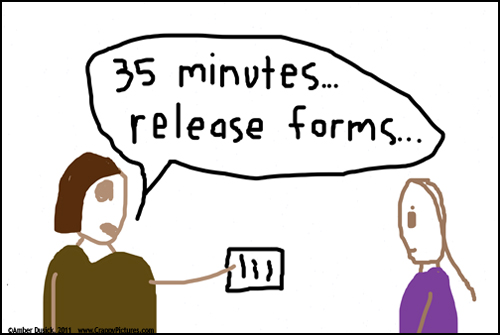 And hands me a liability release form.

But I am not willing to wait in line for 35 minutes for my kids to have a 3 minute turn.

I report the lengthy wait time: 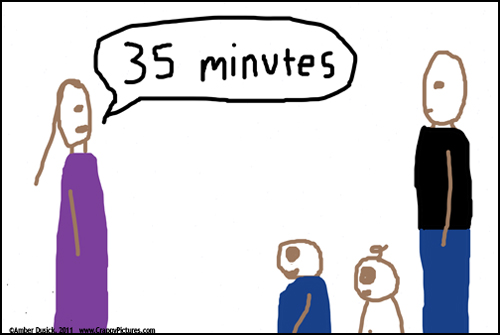 And Crappy Papa and I give each other a knowing glance. A glance that is tinged with fear yet a glimmer of hope.

Saying no will lead to tears and sobbing and shrill sounds.

Which means this is an emergency!  Time for pixie dust: 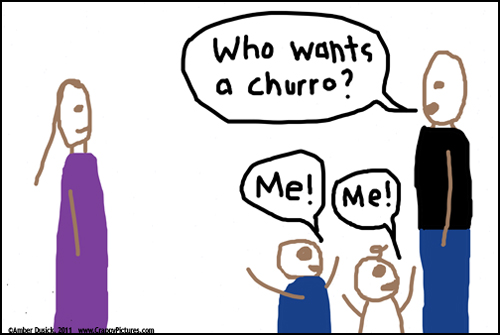 Pixie dust is sugar. It solves all problems and makes kids fly.

Only in emergencies! (no, the fairies didn't give it to us)

The bouncer is forgotten and we make our way out. 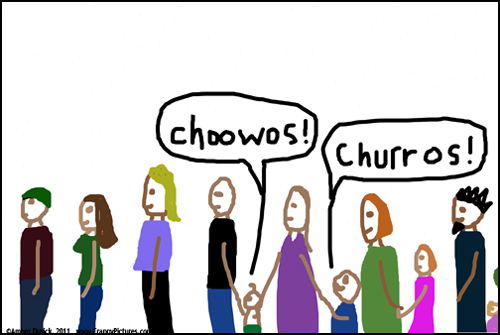 Sailing the seas of cheesy people.

But when we get to the churro stand: 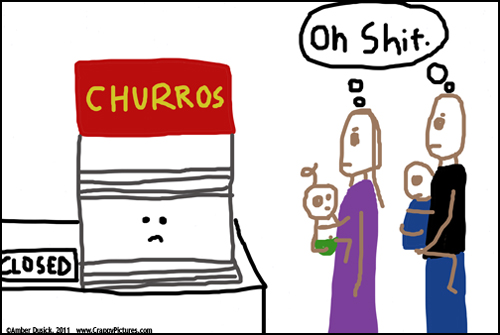 The churros have been had. By other people.

Yes there were other treats. No, they didn't want those.

When you want a churro nothing else matters.

They cry. Loudly. The churro stand is right near the exit so we remove ourselves as quickly as possible.

It is dark outside.

We make our way to the parking structure receiving dirty looks from every other human except the ones with kids who look upon us with pity.

The kids continue to cry over the injustice of being churroless. 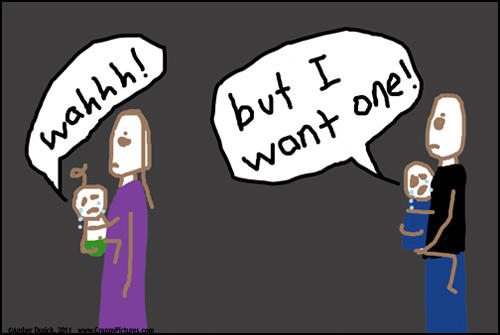 Other than the five minutes of them sitting in a replica of the car that we are now walking to, it was a total waste of time.

While pulling out of the parking structure, Crappy Boy says: 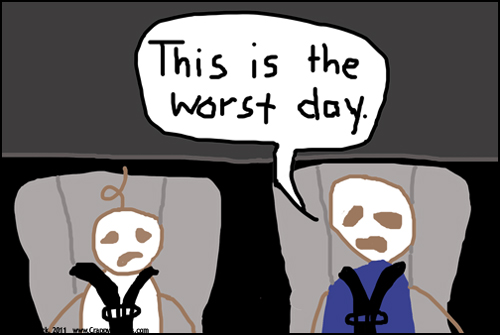 Which is exactly the opposite of music to my ears.

I tried, I really did. I did it for them. I hate cars! Sigh. It doesn't matter, it was a total failure for all of us.

Then a block later, he perks up and points out the window: 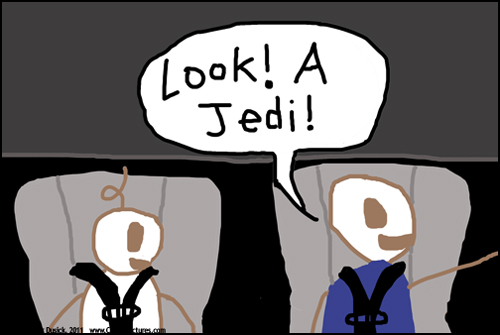 He sees a Jedi. His is elated!

The Jedi is actually a parking attendant with a lighted wand to direct cars: 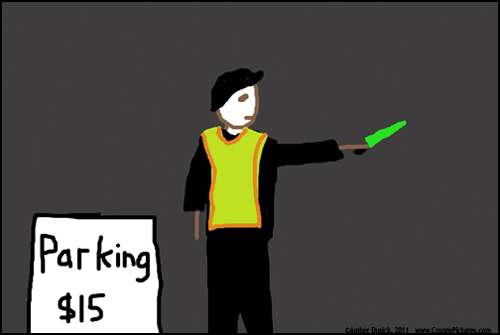 I tell him that he is a parking guy.

Parking guy status does not replace Jedi status. They can coexist.

"Truly wonderful, the mind of a child is." – Said by Yoda, that was. Write like this forever, I could. Talks like this, my Dutch grandfather does.

His elation unscathed, he asks:

And I say yes.

Which causes him to change his assessment of the day: 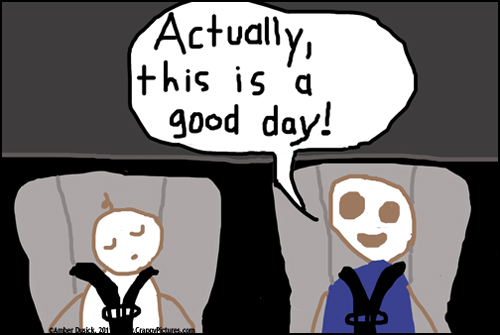 And within a few blocks, it got even better: 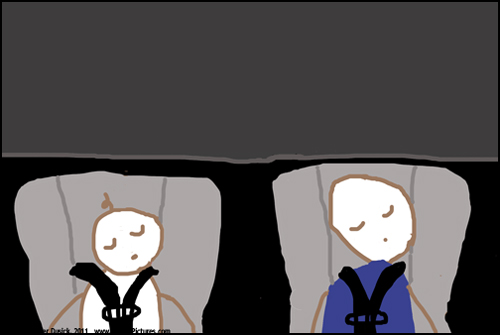 Anyone who can change the "worst day" into a "good day" totally has the Force.

So I didn't lie. He really was a parking lot Jedi.

This entry was posted in crappy pictures, five, outings, parenting. Bookmark the permalink.

122 Responses to the car show, illustrated with crappy pictures™