I'm still recovering from the holiday break. It is hard to get back into the swing of things after you've slacked off for so long.

Really? I'm expected to put clothes on my kids again? Can't January be a pajama month too?

So before I jump into completely other random things I thought it would be weird if I didn't say something about our little holiday break. So I will say something…

We gave Crappy Boy a particular gift and he really didn't like it: 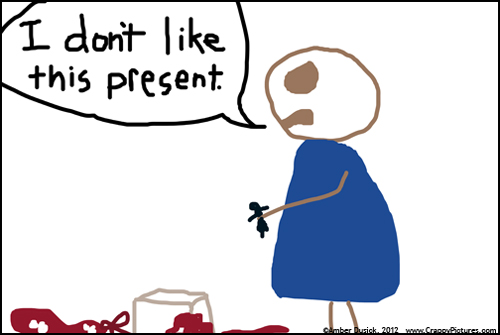 We already know he suffers from appreciation deficiency. But this was something else. This was him suffering from honesty.

Turns out, pretending you like a terrible gift and saying "thank you" doesn't come naturally.

Fortunately, this happened at home. I still had time to encourage proper manners before we saw our extended family.

I also briefly mentioned something about returning and exchanging items.

Then we left to be with family. His new knowledge would be put to the test. I was feeling very confident as a teacher.

At first, I thought he was going to ace the whole exam. 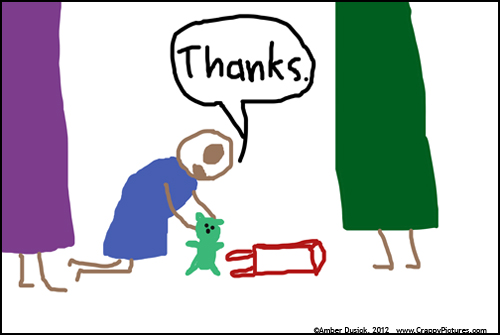 He said thanks when I could tell he didn't like it.

But then something went wrong. 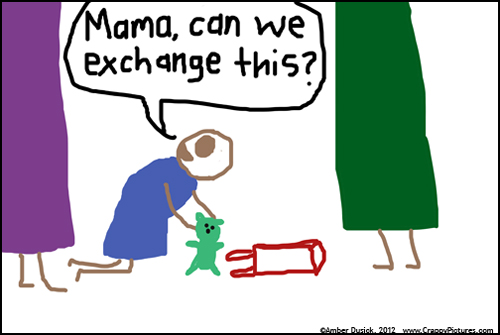 And this time? It was the teacher's fault. Oops.

Despite being embarrassing, it was also funny. Because embarrassing things are always funny. The gift-giver just laughed and said the gift-receipt was in the bag. Isn't it great when people are cool like that?

Anyway, I was still concerned for Crappy Boy's apparent lack of skill in appreciating gifts and accepting them gracefully. Crappy Papa & I talked about it. Do we spoil him? Does he have an unhealthy sense of entitlement? Do we remember being like this when we were five?

Turns out, we were. I remember being upset over receiving the wrong kind of big girl underwear (I wanted The Smurfs but got something stupid, yes, I'm still bitter!) and Crappy Papa told me that he cried with tears over some lacing toy thing because he hated it so much.

So we decided to cut him some slack. We were expecting way too much.

The next day he received a card in the mail with cash in it. 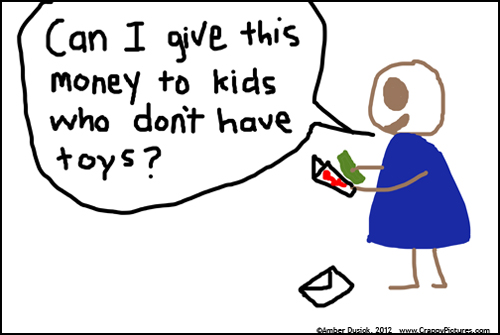 And he surprised us when we were least expecting it.

Isn't that great when kids are cool like that?

Do you have a crappy gift story?

163 Responses to teaching the art of accepting crappy gifts