My kids like to get those Star Wars dictionary

and encyclopedia books from the library. They study them. They pore over them. And they know most of the names of the characters. But not all of them. And unfortunately, neither do I.

Like most kids, they often like to suddenly “transform” into a character role. Not necessarily from Star Wars, sometimes it will be, “Mama, I’m a police officer!” or “Mama, I’m an elf!” or whatever.

But this day it is Star Wars. And they’ve picked two Jedi characters whose names they do not know. So they simply describe them.

We’re in the aisle of Home Depot and several people are walking by: 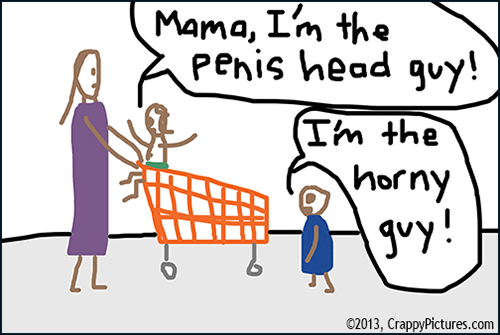 It was 100% beyond explanation to people passing by with confused and amused and shocked looks. So I just ignored them and wished that I was wearing my robe.

But just so you know, it was Ki-Adi-Mundi and Agen Kolar. See? Those descriptions totally fit.

WAIT. I found out that my book, Parenting: Illustrated with Crappy Pictures, was nominated for Best Humor Book 2013 on Goodreads. This is amazing and shocking! You can vote now (book is in the humor category) and there is a chance it will break into the semi-finals round. Thanks so much for your votes and support, it means the world!

This entry was posted in outings, parenting. Bookmark the permalink.