Art and Stories By My Kids

Both my kids have shown a renewed interest in drawing and writing. It’s been pretty neat.

The Apple, by Crappy Boy

Crappy Boy says no because it is too yummy.

But then he changes his mind and gives the apple to Crappy Baby.

Crappy Baby played a trick. He gave the apple to the cat.

(Is that cat not the most perfect sad sheep? I also love that although he has drawn bodies on people he refuses to because “it takes too long”. Efficient, like me.)

Then a couple months ago, both kids had their stories acted out by The Story Pirates. (Which is an acting troupe that selects and acts out kids’ stories on stage and it is hilarious and awesome.) Crappy Boy’s story involved a robot who “turns bad” and Crappy Baby’s story involved something that “smells stinky like the sheep’s butt at the petting zoo” an ice cream truck and an evil cat.

It was great, they were stars for the day. Well, except the part at the very end where the actors invite the kid writers onto the stage to bow and answer a couple questions and Crappy Baby yelled into the mic:

Then he ran off the stage. So honest. (And exactly what I say inside when I’m being interviewed.)

But sometimes the things they write and draw are rather, um, disturbing. Remember a few months back when I posted the artwork that I was having turned into silver jewelry by KidzCanDesign?

This was the art I picked: 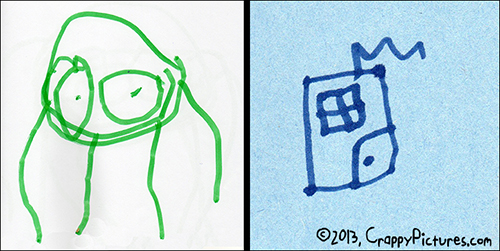 The house is just one of Crappy Boy’s classic houses. He draws them exactly like that every time. They remind me of him.

The crazy looking Igor guy was drawn by Crappy Baby. I think the guy itself is cute but the story behind it is rather disturbing. “He is a baby locked in a cage and he doesn’t know how to get out of his cage.” Um. What? The art therapist in me twitches. What does it mean!?

Anyway, the house and caged baby have been forever replicated in silver and here is a photo. This makes me feel a whole lot less guilty for the inevitable tossing of thousands of pieces of original artwork. These will last forever. (The reflection made it tricky to show the lines of the art and I just couldn’t get it to look right in a photo so the bottom photo is after I filled it the lines in with a sharpie and put them both on one chain to wear them together. I can never leave things alone. I suffer from DIY disease. Huge thanks to KidzCanDesign for sending these to me, they are lovely.)

Seriously, what DO you do with all the art? Other than hide it underneath other trash to make sure they don’t notice that you put it in the trashcan, of course. Why no, I’ve never done that. Never. Ahem. The piles of artwork have reached hoarding level and it is surely a fire hazard. Help!

PS – It bugs me that the word is ‘indescribable’ instead of ‘UNdescribable’. English is weird. ‘Indescribable’ doesn’t even look right. Actually now neither of them do. Sigh.

PPS – Awesome giveaway of FIVE copies of my book is happening on Rants From Mommyland today.

PPPS – And another awesome giveaway of my book (and Jill’s book & Nicole’s book too!) here on People I Want to Punch In The Throat.

214 Responses to Art and Stories By My Kids